After what can only be described as a very mild winter, with some extremely warm January and February days, we received a short blast of cold air that dipped our temperatures down to 26 and 24 degrees this past Wednesday and Thursday mornings.  The dilemma that ultradwarf bermudagrass greens growers faced was whether to cover the greens - and probably burning some overtime hours doing so - or not cover.  As we approached the first cold evening, our soil temperatures were in the mid-50's, and had been in the lower 60's the week prior.  Additionally, we were expecting only three cold days and two cold evenings, followed by projected highs of mid 50's, then mid 60's for two days, then 70's for a few more.  There was a lot of email chatter going on among Atlanta superintendents as this weather approached.

Here at East Lake, we may be a few degrees warmer than many of the clubs in the metro Atlanta, as we are an in-town course.  We have been growing roots since mid-January, spoon feeding the greens with small amounts of potassium nitrate, micronutrients and Harrells BioMax 4-0-0 to promote continued production of carbohydrates.  Because we felt so good about the health of our greens and their ability to quickly recover from the cold temperatures, we decided to not cover.  If we had just gone through a long, cold winter, had just started to break dormancy and had soil temperatures in the low 40's as this weather approached, we would have covered.  As it turned out, everything looks fine, with only a slight loss of color on our greens.  Fortunately the Meyer zoysiagrass fairways, despite getting some frost Thursday morning, also appear to have made it through the cold without losing color.  We even were able to accommodate 20 guest rounds on Wednesday (with a high of 43 and wind chills in the low to mid-30's!) that we would not have allowed if we covered, so our decision was a win-win for the club.  By looking at the "big picture" of our turf's health, our soil and atmospheric conditions in our location and the projected length of the cold and quick return of warm temperatures the East Lake Agronomy team felt very comfortable with the decision. 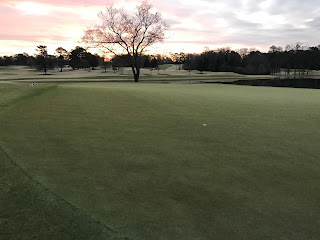 Above is a photo of our practice green with the 8th and 6th fairways in the background. 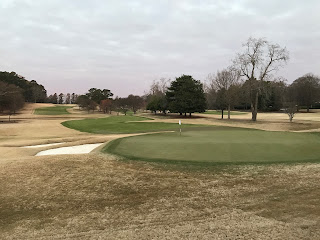 This is a photo of our 18th green with a TifGrand approach and Meyer zoysiagrass fairway showing good color one day after the two cold nights and cold days.