Not Your Normal December

It seems as though most parts of the United States are feeling unseasonably warm weather this winter and East Lake is no exception to that. Currently we are going through a 3-day warm spell that is bringing low temperatures in the high 50's, and daytime high's in the low 70's. Our average high temperature for this time of year in Atlanta, Georgia is 55 degrees.

The unseasonable weather the past few months has presented our Agronomy department with added challenges, from disease management all the way to grain production in greens. Immediately after the TOUR Championship at the end of September we begin preparing our MiniVerde greens for dormancy. The cultural practices of grooming, ultra-grooming, verti-cutting, brushing, and topdressing are greatly reduced. Walking greens mowers are changed to smooth rollers and heights of cut are raised. In preparation for the first frost our goal is to raise canopy height to help protect the crown of the plant as well as increase leaf tissue, giving the plant the opportunity to build and store more carbohydrates for winter dormancy and spring green up. The higher H.O.C. also aides in avoiding excessive greens speeds throughout winter dormancy. With the increase in leaf tissue and reduction in cultural practices comes an increase in grain build up. Typically by this point in the year we have had one, if not multiple, hard frost occurrences on our greens. This weather event leads to a loss of turgidity in the plant leaves and stems, helping to decrease the grain effect on ball roll. Needless to say, we have not had this hard frost occur yet this year and grain build up has begun to significantly impact the surfaces of the greens. 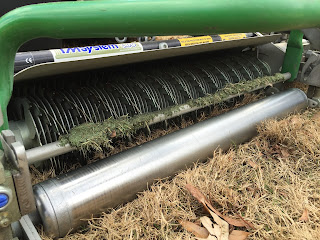 To combat this, our team has taken an approach that is used weekly during our growing season to combat grain. Ultra-grooming. There's a first time for everything, and this year is no exception to that. Each Ultra-grooming blade is spaced 1/4" apart and offset from the previous blade. The process helps pull excessive material from the canopy, cut off runners on the surface "renegades", stand stems upright, and removes fatter leaf blades helping to produce a truer putting surface. 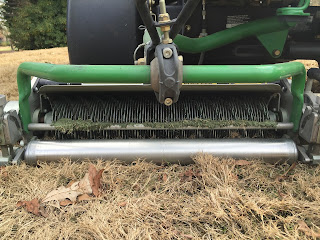 While 70's is warm for December, we know it's not nearly warm enough to sustain growth for substantial recovery of Ultradwarf Bermuda grass. That being said, the purpose and depth of the ultra-groomers was set to help alleviate grain issues without causing unrecoverable damage. 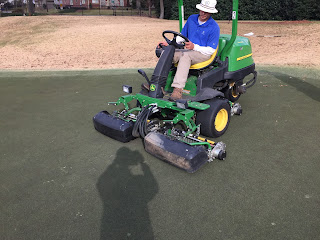 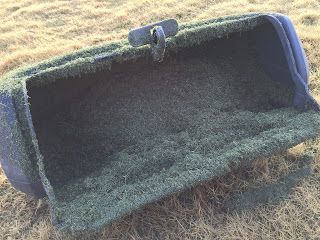 Material removed from one ultra-grooming unit on one green
BEFORE 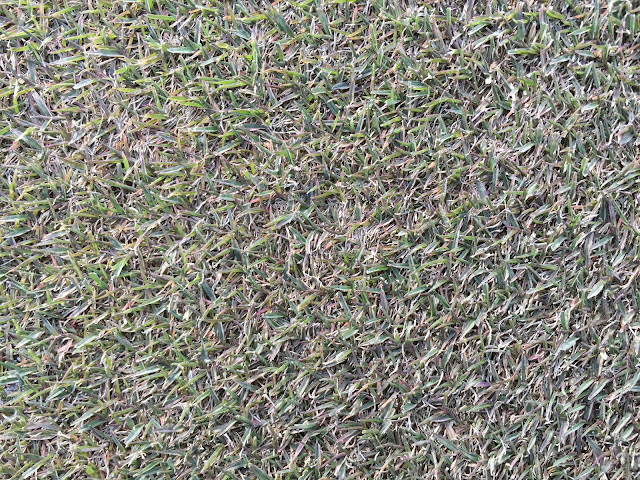 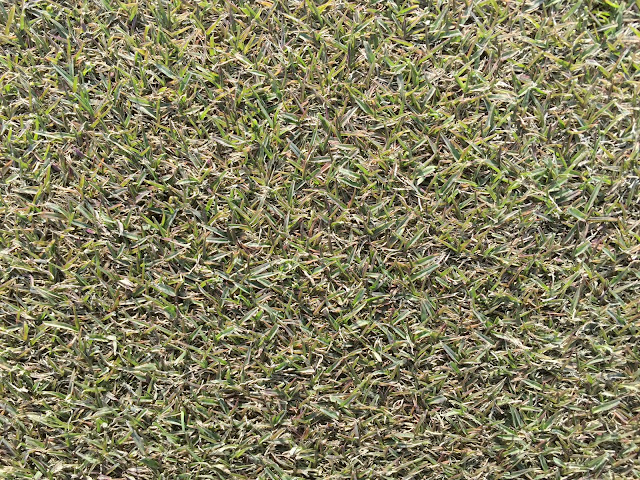 The greens were backtrack ultra-groomed in the direction of the grain. The first pass was made going downhill with the grain and then again on the same pass going uphill. The day after, the greens were cross cut with a brush attachment on a J.D. SL 180. While green speeds did not greatly increase after performing the practice, the consistency in speeds from uphill to downhill putts and in-grain to with-grain putts greatly increased. We also saw a tremendous change in the balls ability to roll true and not "fall off" due to excessive grain on slopes.
Charles Aubry
Assistant Superintendent
East Lake Golf Club