East Lake Golf Club is a private facility located approximately 5 miles east of downtown Atlanta.  More prominently, East Lake is known for being the home course of golf legend Bobby Jones.  Jones is said to have played his first and last rounds of golf at East Lake. Over the years, the golf course has hosted many golf tournaments including the 1950 U.S. Women's Amateur, 1963 Ryder Cup, and 2001 U.S. Men's Amateur.  It is now the permanent home of the TOUR Championship, the culminating event of the PGA TOUR Playoffs for the FedExCup.

All proceeds from operations, as well as charitable donations from the club’s corporate membership, support the East Lake Foundation and its remarkable redevelopment project.

East Lake itself, a sparkling stretch of water surrounded by forestland, was originally the site of an amusement park in the 1890's.  It was privately owned and its chief attractions were a swimming beach, picnic tables, hot dog-popcorn-peanut stands, and a penny arcade.  There was also a real steamboat that huffed and puffed up and down the narrow confines of the lake to give sightseers a thrilling ride.

During the mid 1800's, the US was experiencing an unprecedented growth in the interest of sports.  At the time, Atlanta did offer many social clubs, but there was no club organized for the purpose of promoting athletics.  Led by Burton Smith, a group of 65 men formed the Atlanta Athletic Club in 1898.  The club initially had no golf course, but four years after its founding, it had more than 700 members.

George Adair, the clubs president, soon realized the increased interest in golf, and in 1904 purchased the 187 acre former amusement park and lake in DeKalb county to create a country club, engaging golf architect Tom Bendelow to lay out the course, which would be called East Lake.  It would be the first golf course built in the city of Atlanta.

In 1913, famed golf course architect Donald Ross completely reworked the original Bendelow course at East Lake.  The remodeled course featured a routing plan that provided each nine holes to conclude at the clubhouse.  Previously the original course had nine holes that finished across the pond from the clubhouse.

Until the 1960s, East Lake was part of the Atlanta Athletic Club.  However, not long after the club hosted the 1963 Ryder Cup, the outlook for the area around the club began to change.  The surrounding neighborhood deteriorated as the 1960s fell victim to white flight and urban decay.  The AAC became part of that flight when it sold the number 2 course and moved to its present home in Duluth.  The original course and clubhouse were saved when a group of 25 members purchased them and began the operations as the newly formed East Lake Country Club in 1968.

In 1970, the East Lake Meadows public housing project was built on the site of the clubs numbers 2 course, and became a center for poverty, drugs and violence.  Middle income homeowners fled the surrounding area, replaced by low income renters.  By the 1980s, once proud East Lake was a tired,  mostly forgotten golf course, seemingly as hopeless as the surrounding neighborhood.

This all changed in 1993 when an Atlanta businessman, philanthropist and golf enthusiast Mr. Tom Cousins,  purchased East Lake Country Club and donated it to the CF Foundation with two conditions.  First, the legendary course and clubhouse would be renovated to its original glory in honor of Bobby Jones, Charlie Yates and other golf champions who called East Lake their home course.  Second, those profits from the operation of the club would go to the East Lake Foundation to be used for the revitalization of the surrounding neighborhood.

Golf course architect Rees Jones was hired to restore Donald Ross' original golf course layout, which had been altered over the years.  Atlanta architect Frank Bull was hired to bring the Tudor clubhouse back to its earlier splendor. 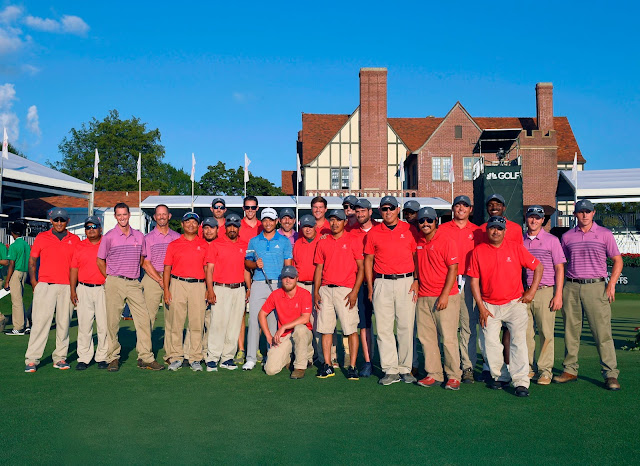