Back in late April we performed some plug work on a few of our greens edges. After removing what plugs were needed from our nursery green, the void was left for the entirety of the summer, and the picture below is what occurred.

With the lateral-by-nature growth of MiniVerde, the grass crept across the void slowly throughout the summer and ended up almost filling the gap completely. This fall after tournament we had some time to go in and repair the void. Upon doing so we came across what was,in all reality, a friendly reminder. 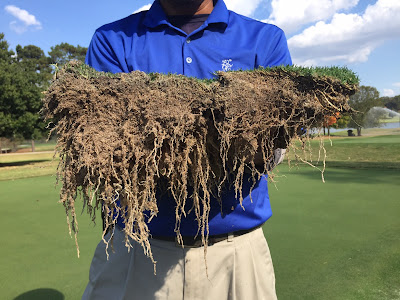 As you can see the roots from the new stolen's that had crept across produced fantastic roots. After some speculation as to why these roots were so much better than what we have on the rest of the greens, we came up with the following.

A few years ago we used a dyed green ultra-fine sand to topdress our greens. After seeing some of the poor results it produced we decided to stop using the sand. As we continued our topdressing program that green sand layer moved deeper into our profile. It currently sits at a 1.75" below the surface. Our roots have a very difficult time penetrating this layer, and the majority of them stop exactly as this interface. The only primary roots we see move through this layer are in aerification holes.

The plugs that were taken from the nursery green completely removed that fine green sand layer.You can see the indentation in the photo. The stolens that then crept across had clean uniform 80:20 USGA construction mix to grow roots in.

Moving on, the indentation left in the green created some issues with mowing and rolling the green. Therefore, the turf was not mowed or rolled at all while it was growing across the void. MiniVerde being a tight, low growing surface to begin with, the HOC never really grew over .200" tall. The reduction in mechanical damage due to mowing, rolling, and any foot traffic was non-existent. Of course, we all know that reducing traffic and stress on the plant is going to lead to an overall healthier plant, but this was certainly a friendly reminder.

As we continue to try to balance membership expectation's and plant health going into winter (and, really at all times), this was a nice eye opener and reminder to lay off the added traffic when we get the opportunity to.