Our driest stretch since 2012

Showers and storms throughout the metro Atlanta area have been very spotty since the first part of March, and it seems we have been missing the showers much more than receiving them.  Of course, there are advantages to that:  We have not had to push up bunkers in a very long time (after a fall and winter stretch where it seemed that was a daily occurrence), construction projects were able to progress in a timely manner, we have been able to control moisture on greens and tees to a large degree and so on.  With the construction projects we completed from February into mid-May, however, we had several acres of sod installed that required lots of water.  As a result, our lake level is down to a level even lower than it was in 2012 when Bill Haas hit his miraculous shot from the edge of the water onto the 17th green during a playoff to win the TOUR Championship by Coca-Cola and the FedEx Cup.  Below is a screen shot taken as Bill was about to play his now-famous shot, and below that is a photo of the pond level as it stood this morning.  If you compare the drain pipe sticking out into the water, you can see that water level is even lower now than it was in 2012.  (You can also see a lot of golf balls!!) Yep, we could use a bit of rain! 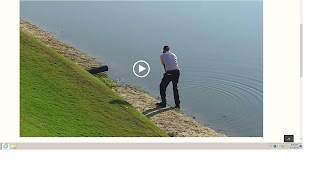 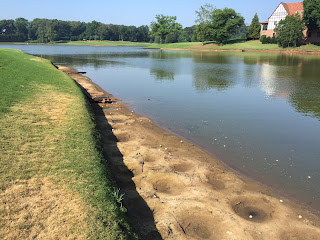