The million dollar question that has been asked several times is "when is winter going to end" Hopefully we are not too far away.
This winter, superintendents in the southeast have been tested by single digits temperatures, ice, snow and plenty of rain. While we have not been tormented as much as our colleagues in the north, it has been a very difficult winter.
As I've stated in previous blogs, we have been closed for 24 days due to inclement weather and have covered greens for a total of 21 days. In comparison to the winter of 2013 we did not cover greens at all, and had no course closures due to inclement weather.

I researched into some old blog posts and found this photo. This photo was taken of number 7 fairway on March 19th 2013. A week after this photo was taken we put our first mow on the fairways for 2013. In the month of March in Atlanta 2013 the growing degree days sum was 70. 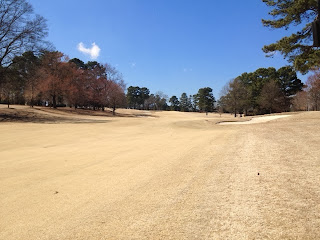 The photo on left was taken today, from number 7 fairway. Notice any difference! Today's photo has nothing that remotely resembles green turf. We estimate we are easily 3 weeks behind our 2013 green-up. So far this month in Atlanta the sum of growing degree days is 21, which is substantially lower than last year, which as I stated above, was 70 growing degree days.
In this case, the 86-50 method of growing degree days (GDD) was used. In this method, the daily maximum temperature that may be used in calculations is 86 degrees. The daily minimum temperature that may be used is 50 degrees. The base temperature used is 50 degrees. The calculation is as follows: The day's high temperature and the day's low temperature is added together and the sum is divided by 2 to get the mean daily temperature. The base number of fifty is subtracted from the daily mean, with the resulting number the GDD.
Example: the high temperature for a specific day was 88 degrees, and the low was 58 degrees. Because the daily maximum temperature is 86 degrees, you would add 86 and 58 (144) and divide that by 2 to get the daily mean temperature of 72. You then subtract your base of 50 to get 22 Growing Degree Days for that day.