From October 2012, through February 2013, East Lake Golf Club has received 24.37 inches of rain.  The amount of rainfall and the lack of sun expose during these winter months, led to an increase of algae bloom on our greens.  Number 4 green, had the worst out of all our greens.  There is a large oak tree directly back and to the left of the green.  With the angle of the sun during the winter, the front left quadrant of the green receives very little sun.  With the predicted temperatures in the upper 60s and lower 70s, we decided to "wash" out the green. 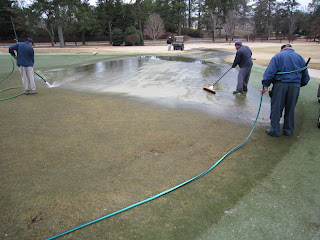 You can see that we have two hoses, with the nozzles placed about 2 to3 inches above the green, washing and removing the algae from the green.  Unfortunately, this also removes all other material from the upper layer of the green. 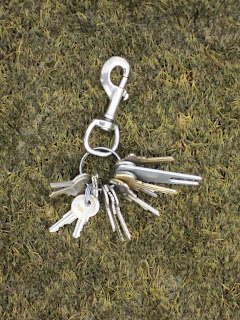 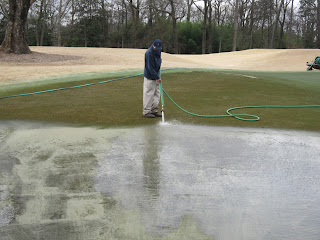 You can see the difference between the two areas.  Directly behind Saul, you can see the dark green portion of the green that has already been finished.  The area in front of him has yet to be completed.  You can see the sand accumulation that is being swept off the green.  In the upper left corner of this picture, you can see the tree that is helping to create the problem on this green. 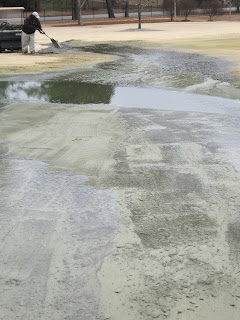 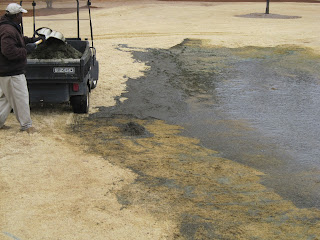 As we are washing off the green, this is what accumulates at the run off point for the green.  You can see that it is a mixture of: sand,( from topdressing, and the greens bunker,) clippings, and algae.  This process will take roughly two days, depending on amount of play.  Once we have finished washing off the green, we will come behind and do a heavy topdressing, by hand, to the target area.  We will follow up that initial topdressing with a lighter topdressing, as we see fit, ( we will have pictures of these applications at a later time.)  With the predicted temperatures, we hope that this area will be fully healed by 3 to 5 weeks.