The bunker below (short left of #7 green) is shown after a 2.5" rain event. This bunker is probably the worst on the golf course for washouts following heavy (and sometimes moderate) rain events. 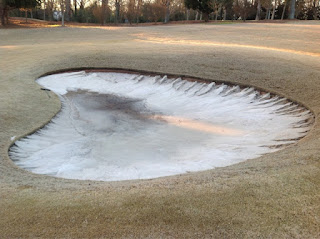 This is the same bunker after removing all of the sand from the bunker. The black "lines" you see are a special material we installed over the drain lines in the bunker to allow water to rapidly enter drainage. 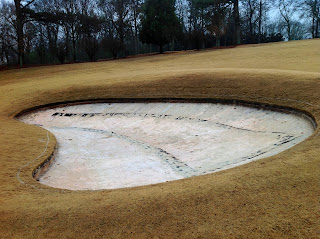 This bunker is the third fairway bunker on the left side of #16. This bunker also has a tendency to washout in heavy rains. We have removed the sand from this bunker as well, and will be testing the new method both in this bunker and the one on #7. 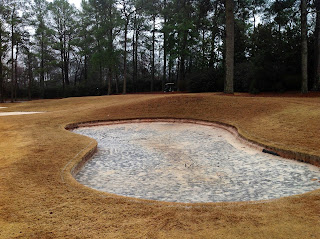 When the golf course dries out enough from the recent rains, we will remove the existing liner, install a 2" layer of washed pea gravel throughout the bunker floor, and then spray a polymer product that binds the gravel together while still allowing water to pass quickly through to the drainage below. Once that is done, we will install new sand and compact it. This new method has been used at Peachtree Golf Club and has been installed at Hawks Ridge this fall and winter. It prevents the sand from washing, saving tremendous labor hours redistributing sand and extending the life of the sand by preventing silt contamination resulting from the washouts.

As we proceed, we will take more photos and post our progress. We are very excited about this technology and the potential to greatly improve bunker consistency for our members and guests!