Due to averaging around 110 rounds a day since the Tour Championship we started our bunker perfection process. This involves spinning the bunkers with a sand pro to smooth and shift sand around.  At the same time the depths of the bunkers will be checked to identify low or high pockets in the bunkers. Next we came in in with squeegee's and roll the bunker faces for maximum compaction. The bunker faces will be irrigated to help compact the face of the bunker, which helps reduce the number of fried egg lies. Last, we come in and hand rake only the bottom pan of the bunker.
In the video above it shows crew members rolling and compacting the bunker face with squeegee's. If you notice they are only rolling the face till it meets the flat pan of the bunker.
Now the final step of the process is shown. If you take notice, the employee will rake a clean up first following the contour of the bunker. This is done so the bunker face will be undisturbed and remain firm. He will then rake the bunker in the set direction for the day and continue on to the next hole and start the process again. 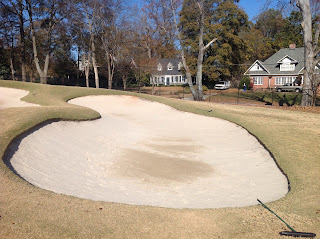 Here is a photo taken prior to the raking process. 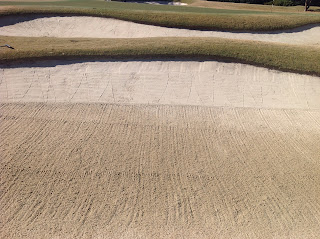 And here is the end result, a nice clean distinctive look. You'll notice the contrast between bunker face and the raked section of the bunker. The smooth sand is maintained by turning over the Accuform rakes and smoothing the sand with the round edge on top of the rake head.  The entire process took two days and approximately 100 man-hours to complete.